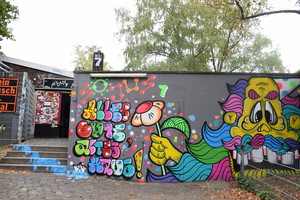 Sojus 7 is a socio-cultural meeting point that boasts a café and rooms for cultural events. The crew organizes cabaret and comedy events, jazz, pop and rock as well as hard rock and metal concerts, theme nights, parties (“Dance into May”, Halloween and Christmas Rock), and art exhibitions such as MonArt or a Children's Creativity Week. The premises of Sojus 7 can also be rented for private parties. All the events are organized by teenagers and young adults.

Find out more on the

Reconstruction of the Sojus 7

After the reconstruction, the Sojus 7 will have numerous new rooms for its vibrant creative cultural life. Shortly after its 30th anniversary, the socio-cultural meeting point is being expanded by almost 1.700 square meters of floor space.

Following a Europe-wide tender, the Dutch architectural office De Zwarte Hond, based in Cologne, was awarded the contract. Their concept maintains the special atmosphere and long history of the Sojus 7 while at the same time meeting the new requirements. These requirements haven been developed during several workshops with both the leaders and the users of the cultural center. The former cabbage factory building in Kapellenstraße will in the future provide even more space for its multifarious activities.

The enlarged main hall and the café will in the future be located in the newly constructed building, providing an ideal surrounding for both guests and artists. The entranceways to the building will be adapted as well, optimizing the entire Kapellenstraße entrance area for visitors and residents. The new concept also makes the whole building barrier-free and offers access via a ramp and an elevator. The sunny yard becomes an additional meeting place to be used during daytime.

Construction works on the new building have started in June 2020, the renovation of the old part of the Sojus 7 is scheduled to start a year after that. The overall costs of the rebuilding project amount to approximately 11.5 million Euros. The first ideas were discussed during a citizen consultation on 27 June 2018. The reconstructed Sojus 7 is supposed to be handed over to the users in July 2022.