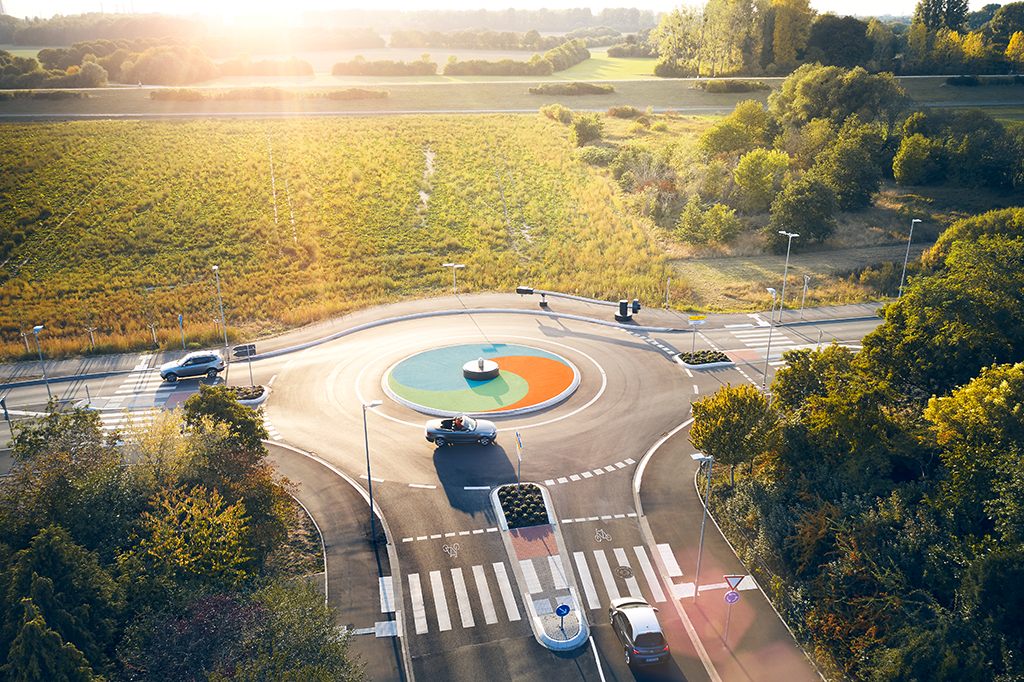 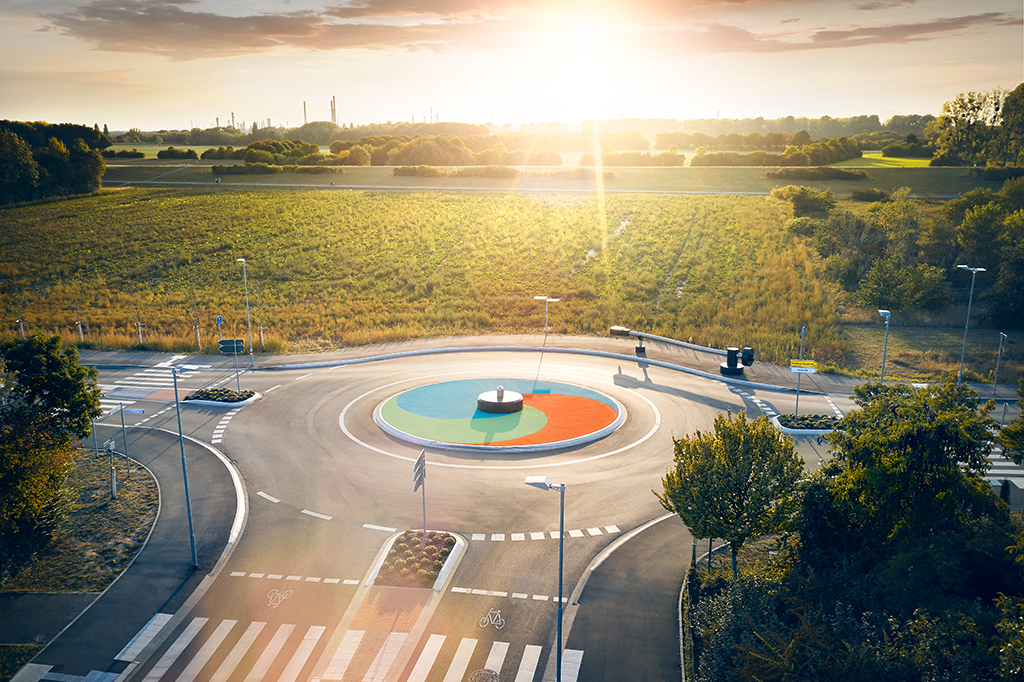 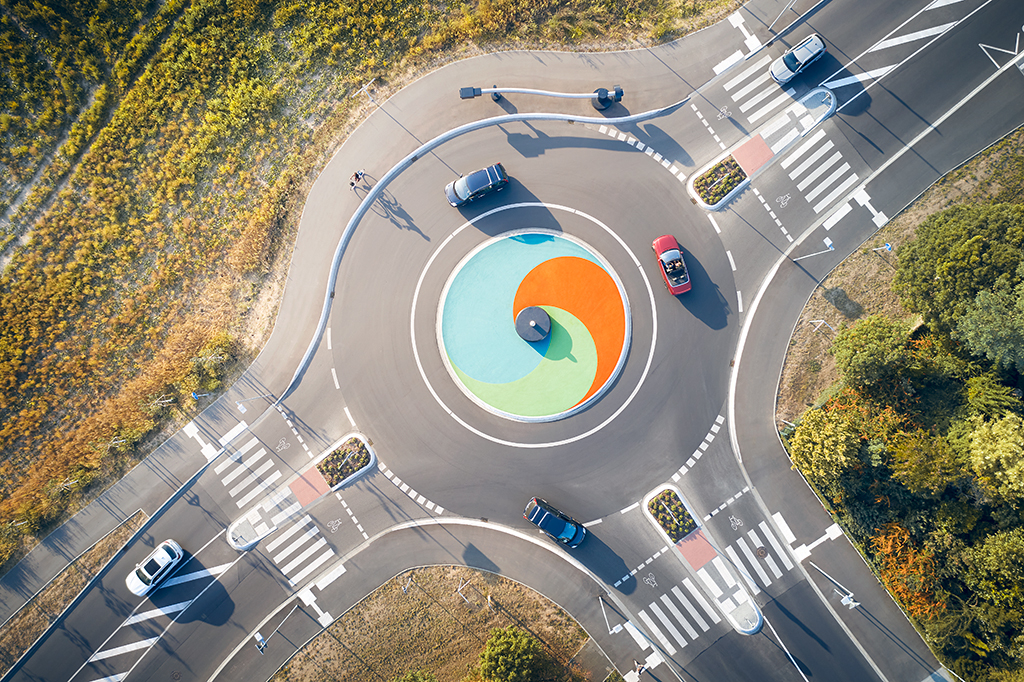 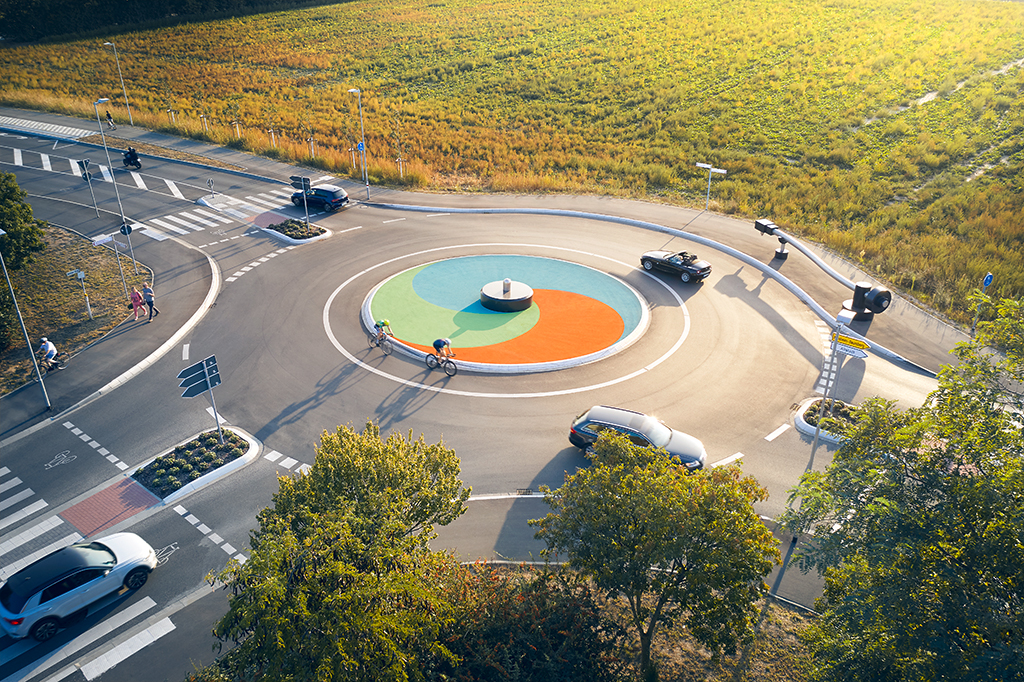 In 1992, the four artists Hans Hemmert, Axel Lieber, Thomas A. Schmidt and Georg Zey joined forces in Berlin to form the artist collective that is Inges Idee. As a group, they jointly use their artistic work to explore the question of what impact publicly accessible art has on people and the urban environment. Furthermore, the artists also work autonomously on their own individual work.

Since the founding of the group, numerous artworks conceived for specific environments have. The works of art redefine these places, thus changing the viewers’ relationship to what they perceive and experience there.

One example is the design of the façade of the parking garage built at Carlsplatz square in Düsseldorf's old part of town in 1970. Since 2004, the artwork entitled “Schmuck” (Jewelry) has displayed ten oversized precious objects threaded into the perforated façade. It looks as if the rather unsightly building has adorned itself with rings, bracelets and chains – rather like many of the users of the parking garage and visitors to the fashion metropolis.

Also from 2004 is the work entitled “Zebra” that stands the gate of the Wriezen correctional facility in Brandenburg. Instead of creating an impact of alienation through enlargement, as in Düsseldorf, here, the artist collective chose the method of reduction. The naturalistically painted statue of a zebra is about the size of a pony. Standing on a small island of grass, surrounded by gray paving stones, the gregarious herd animal looks from the outside through the bars to the prisoners. If one thinks of the inmates wearing the formerly common striped prison clothing, one can regard them as a fellow species of the zebra. Isolated, the small animal stands in its enclosure of grass, rather like the prison inmates in their cells. The reduced form of the zebra corresponds to the clearly limited possibility of self-development that the prisoners have.

In a similarly sensitive and yet irritating way, Inges Idee also defines the traffic circle where Berliner Ring meets Bleer Strasse in Monheim am Rhein. The sculpture called “Haste Töne” (Sounds) picks up on the living space of the people of Monheim and they encounter it on their way to work, to the shops or to an appointment. Here, too, the scale determines the experience, making supposedly familiar things suddenly seem alien. Oversized and best seen from a bird’s eye view, the group of artists has interpreted the traffic circle as a record player with a record on it. The island of the traffic circle contains the spike and the label, and the roadway corresponds to the area of the record’s groove. At the roadside, the arm of the record player is waiting to be used, but the music is already playing. Staged as a record player, the soundscape of the traffic circle can be experienced as music. The cars and bicycles, the pedestrians and birds that all come together here by chance determine the rhythm and dynamics. Their use of the traffic circle ultimately completes the sculptural installation, bringing it to life.

Group of artists for art in public spaces
Founded in Berlin in 1992; consisting of Hans Hemmert, Axel Lieber, Thomas A. Schmidt and Georg Zey