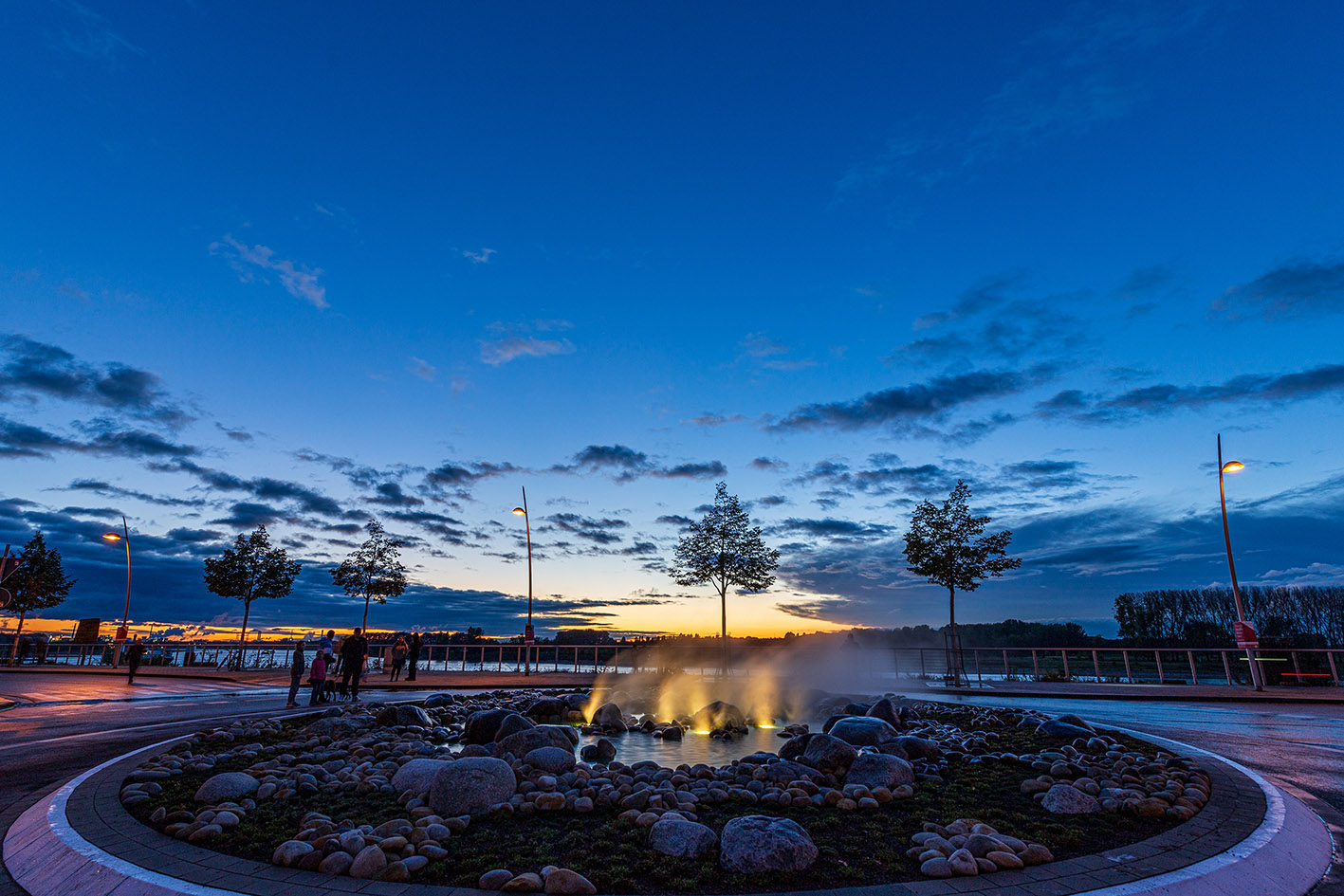 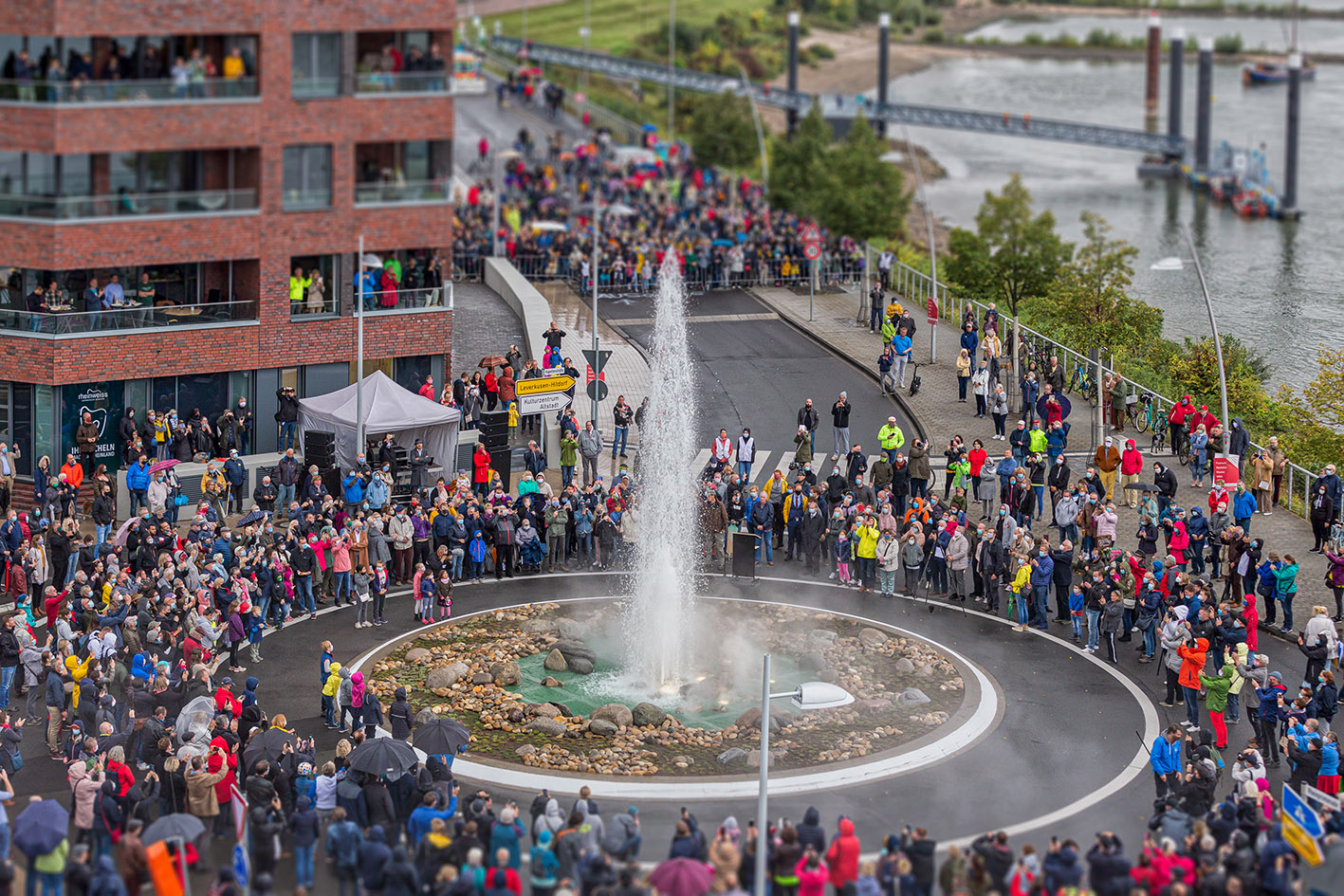 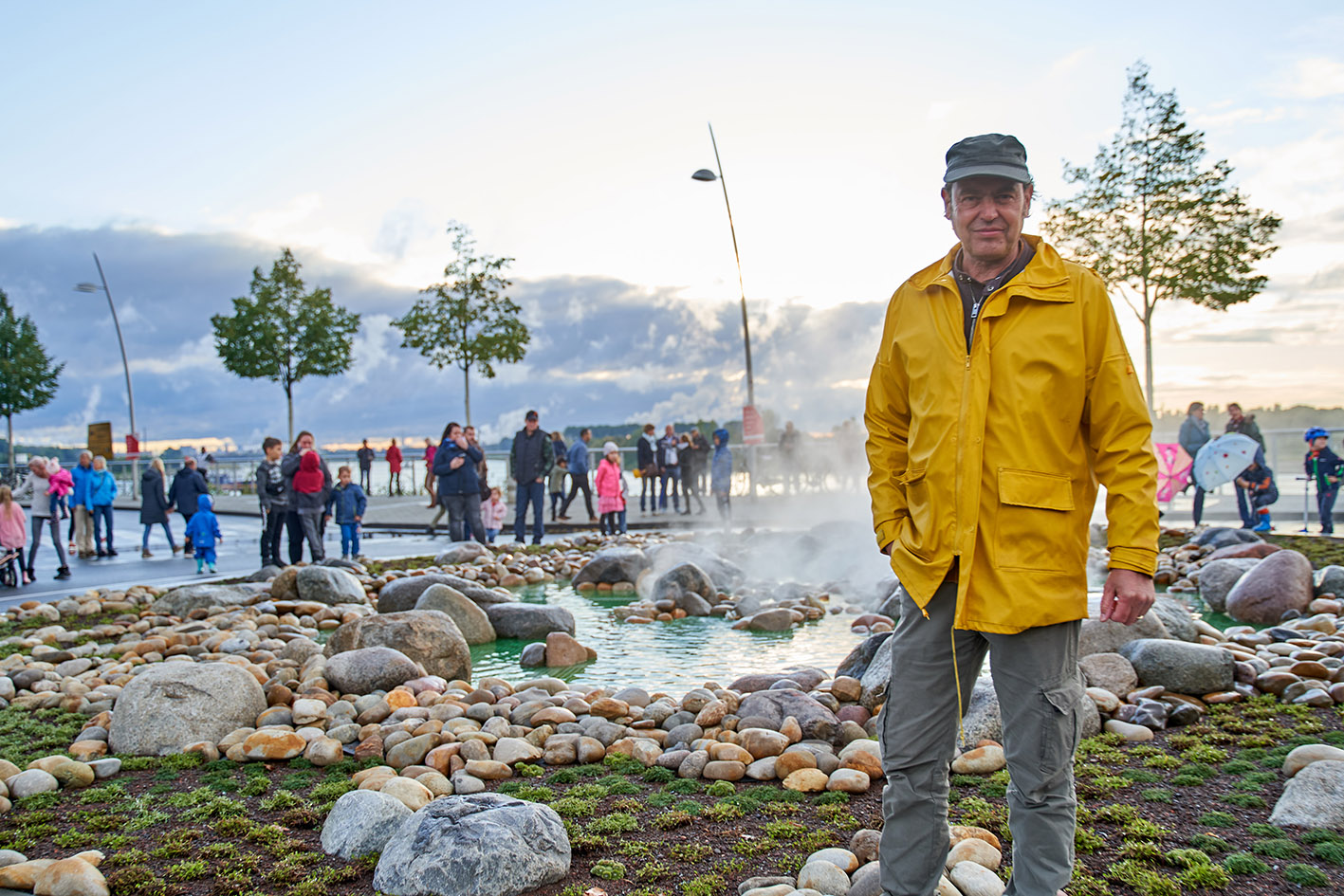 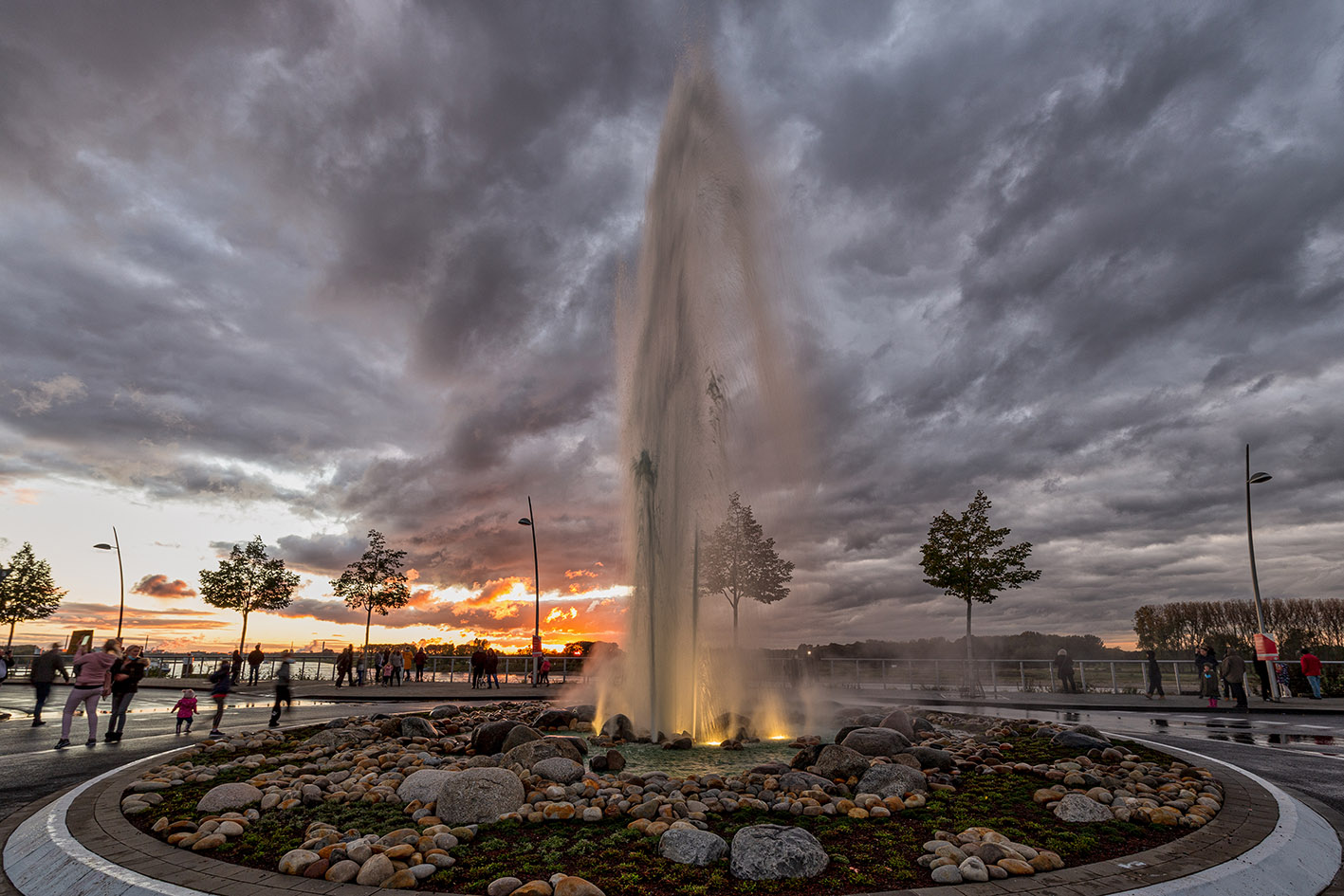 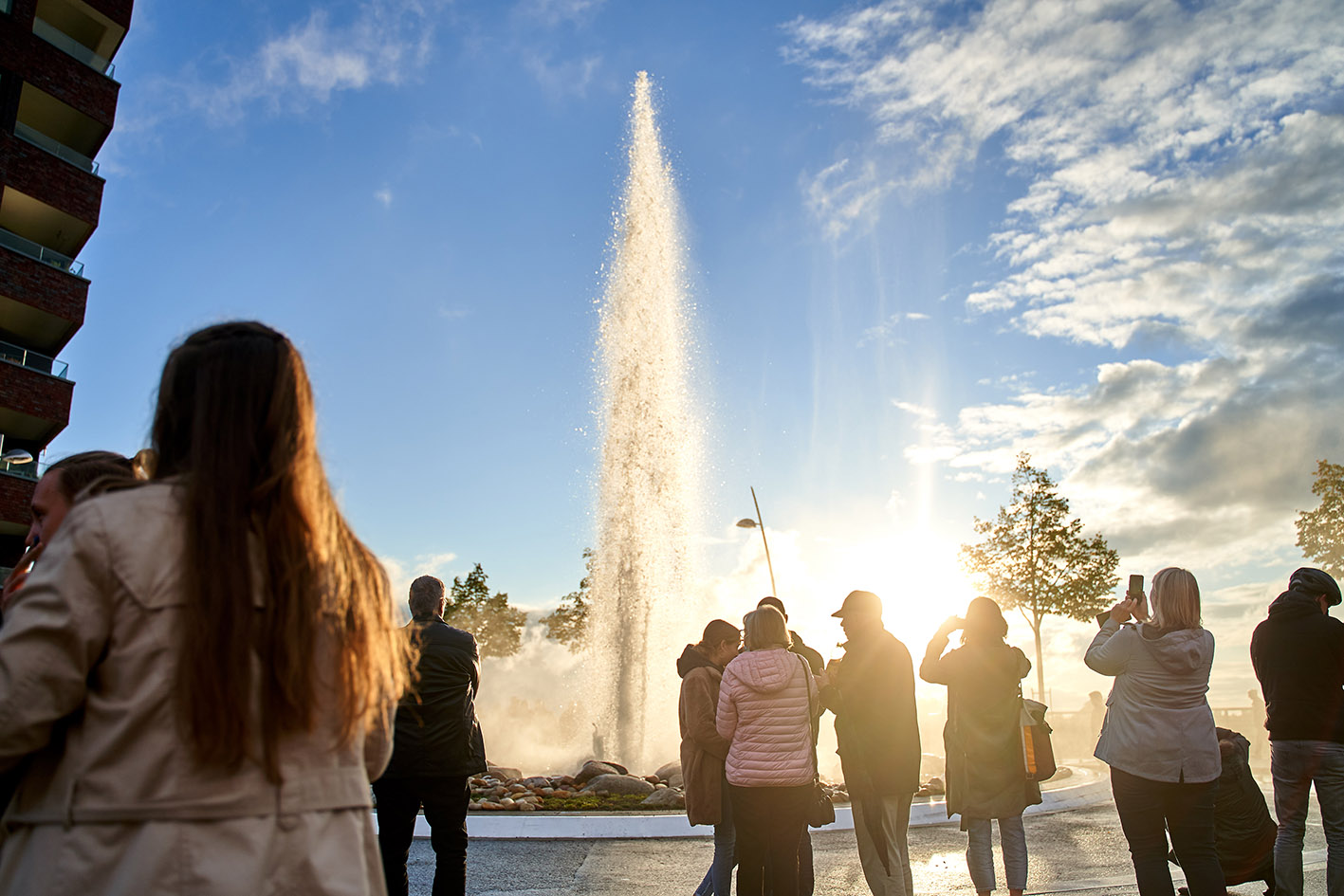 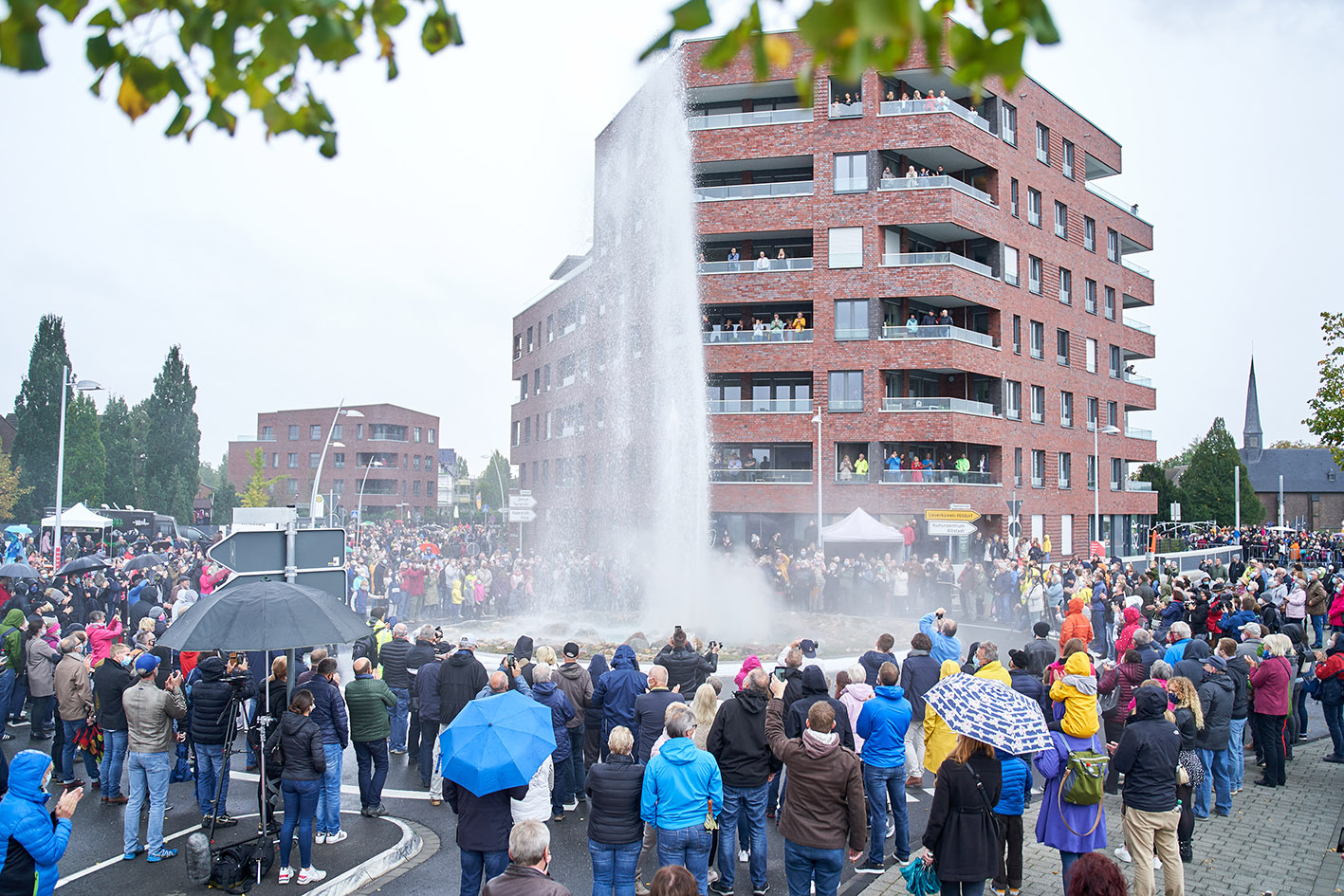 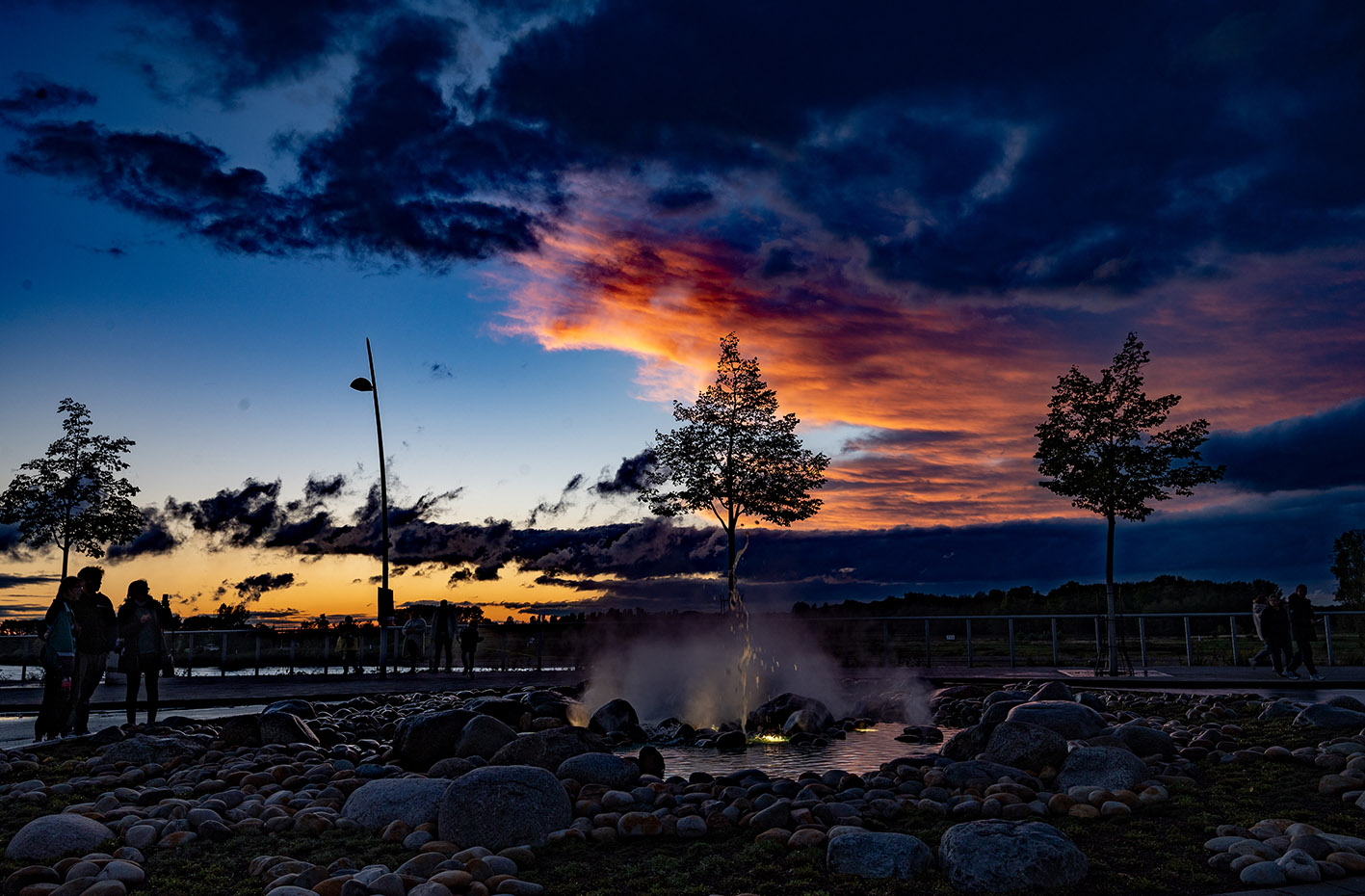 On the roundabout where Krischerstrasse meets Kapellenstrasse, things are bubbling and fizzing away. Light mist is sprayed in a strange way that isn’t really in keeping with the place. Every now and then, at longer intervals, this natural-looking and yet strangely overgrown traffic island displays its vast and fleeting grandeur.

The formerly calm atmosphere is then replaced by a brief but violent eruption: At irregular intervals, the geyser erupts noisily. A column of water more than ten meters high drenches the traffic circle for a brief moment before once again receding into a small basin at the center the island, which is covered with mossy river pebbles.

Created for this very place

The work of Swiss-born and Düsseldorf-based artist Thomas Stricker always explores the themes of public space and nature. His diverse installations and sculptures, which are appreciated all around the world, deal with various aspects of the specific features of each site. In nearby Grevenbroich, for example, his sculpture “Permanent Lightning” has been situated at the entrance to the municipal park since 2009; it depicts a bolt of lightning made of metal and refers to the energy industry which is of importance to the local area.

Site-specific art is art which has been created for a particular place, is inextricably linked to it, and is concerned with it not only formally (architecturally or functionally) but also in terms of content (historically, sociologically and politically). The topic of site-specificity first reared its head in the late 1960s and has become a fixed component of art in public spaces – in many cases determining the quality of the work of art in question.

Thomas Stricker embraces this idea of not only considering the environment of the artistic work and developing an attitude towards it, as is now firmly anchored in art history, but also of integrating it as a starting point in the said work of art itself.

In Stricker’s work “The Monheim Geyser” as well as in his entire artistic oeuvre, the specificity of the place in question always embraces both the spatial (i.e. urban and rural) environment as well as the social aspect of the interactive communication process with visitors and those who commission works of art. Thus, viewing the eruptions becomes a communal event and connects the people on the balconies and behind the curtains of the nearby houses with the people on the street – while the traffic takes a brief break from its usual hustle and bustle.

Thomas Stricker has created a work of art with a significant view of the Rhine and, in his concept, he has made use of the local conditions and the mood of the place. The contrast of urban development and the phenomenon of a geyser, which is unusual for the place, plays a significant role here.

Monheim Geyser website, the city provides information on the next eruption, which depends on ambient conditions such as the number of hours of sunlight.

Born in St Gallen, Switzerland, in 1962; lives and works in Düsseldorf, Germany

1979–1983 Apprenticeship as an electronics mechanic in St Gallen
1986–1993 Studied sculpture at the Kunstakademie Düsseldorf, the academy of fine arts of the state of North Rhine Westphalia; master student of Professor Klaus Rinke
1994 Working stay in Mongolia
1998 Guest lecturer at the Bergen Academy of Art and Design in Norway
2003 Artist in residence, guest studio at the Sydney College of the Arts in Australia
2007–2013 Artist in residence, “Primary School Kalkfeld” project in Namibia
2009–2010 Working stays in Mexico City in the context of the “Residual” exhibition
2012 Working stay in China in the context of the “9th Shanghai Biennale”
2012–2013 Substitute professorship of Professor Holger Bunk at the State Academy of Fine Arts Stuttgart
2018–2019 Substitute professorship for art and its didactics/sculpture at the Faculty of Cultural Studies at the University of Paderborn